Did al-Ghazali, famous Persian theologian, end Islamic science? This explanation has been dominant among economic historians and historians of technology as to why the Islamic world – having produced major advances in science, mathematics and surgery, the first hospital and (I only learned this recently) the first university in Fès, Morocco, founded by Fatima al-Fihri – faced an apparent decline in prosperity, science and technological advances. Joel Mokyr in his seminal Lever of Riches states:

“In its original form Islam was as receptive to technological progress as Western Christianity, but as we have seen it started to become less so around the twelfth century. The great Islamic philosopher and theologian al-Ghazali (Algazel) (1058-1111) concluded that science and technology were incompatible with Islam and attempted to reconcile mysticism with their religion, at a time when Western theologians were making Christianity more rational and compatible with classical science” (Mokyr, 1990, p. 205-6).

At the center of this drama is al-Ghazali’s influential work “The incoherence of the philosophers” (تهافت الفلاسفة), which inspired a more inwardly focus on matters of religion. Ghazali has been interpreted as producing a critique of mathematics and science, as leading to heresy and being (potentially) anti-religious. In Mokyr’s view, this conflict between traditionalism (secular or religious) and rationalism, has been the watershed that historically has separated innovative societies from backwardness.

Recent work gives us reasons to revise this view. In a recent article, Eric Chaney, heads out, like an economic historian should, to test the development of scientific output using empirical data in order to say something about what may have caused the decline. Using Harvard’s library collection and a 17th century Turkish catalogue of books, Chaney argues that there was indeed a decline in scientific output. The share of scientific works diminished, while the share of religious works increased, already from the 11th century, with a successive spread in this pattern from the East to the West. He argues that the explanation is not squarely the influence of one particular thinker (Ghazali), but rather a greater influence of religious leaders over civil society (education in particular) through the Sunni revival of the 11th century, the spread of religious educational centers, “madrasas” (Arabic for “school”) and as a result an ensuing decline in the incentives to produce science. Not only did matters of theology trump science in attracting new talent. According to Chaney, while Golden Age muslims had rationalistic interpretations of Islam, viewing scientific exploration and quest for knowledge as an important part of religious practice, the new leadership preferred authority, mysticism and keeping science under constraints, because it secured their political influence. The evidence seems convincing given the timing and the observation that the Sunni Revival and spread of madrasas occurred during this time and following a similar geographic pattern.

Chaney takes this evidence to support a line of literature that “religion matters” in constraining human capital formation, innovation and economic development. While this may be a reasonable position in some instances, in the case of medieval Islam, an important question is however, why such a shift in the religious leadership had occurred. Chaney (pp. 23-27) touches upon the following explanations:

He argues for the last one, though noting that the evidence is inconclusive. However, this might arguably understate a set of more important factors, the constraints of growth in traditional societies. Other economic historical work has placed the peak level of living standards in the Islamic world around the 8th to 10th century (e.g. Pamuk & Shatzmiller, 2014), after which GDP per capita declined (Figure below are GDP/capita estimates for southern Iraq in 1990 USD). 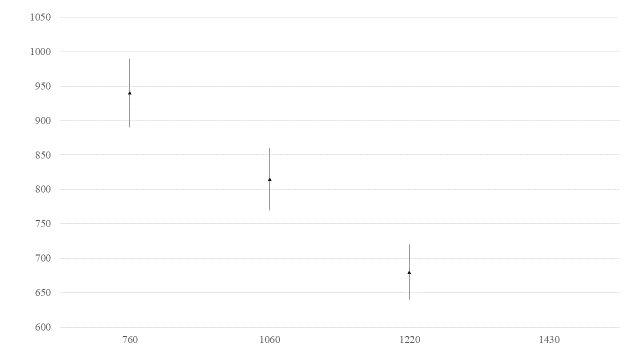 Moreover, natural resource constraints were felt.  Large forests had disappeared in the Middle East already during Antiquity, a situation worsened as a consequence of the expansion of Islamic civilization already in the 8th century. This, while the vast forests of Europe would allow the continued use of wood for ships, construction and industries (of course the wood shortage, eventually made itself felt, not the least in 16th century Great Britain, being an important factor behind the industrial revolution). Together with the demanding military confrontations through the crusades, it might thus be feasible to argue that a socio-economic decline produced the situation where religious leaders were given power, at the expense of (secular) bureaucracies, and used this power to restrict alternative worldviews. This all may seem like nitpicking but it is an important aspect of understanding the nexus of religion and economic growth, especially in light of recent islamophobia, since it guards from the unfortunate but nowadays ubiquitous idea that religion, or culture, has an essence independent from not only power structures but basic material relationships such as, say economic development and geopolitics. Though evidence is inconclusive, I am inclined to think that, the fate of Islamic science and technology is yet another lesson on how adverse economic conditions may morph (religious or political) ideology and empower inward-looking (economic, political or religious) elites. This position would, rather than pointing to religious traditionalism for the lack of economic development, seek the root causes in structural economic development issues and, quite importantly, geopolitical relations both of which may support and favor traditionalism in the first place.

One must acknowledge that there is a second strand of responses to the classical view of Islamic decline. Saliba (2007) argues that important scientific advances continued well after the 13th Century and that the contradiction between post-Revival Islam and science has been exaggerated by (mostly Western) scholars. Some scholars would even extend the Islamic Golden Age well into the 17th century. While prolonging the Golden Age much further than the 13th or 14th century may be exaggerated, it seems very likely that the Islamic world continued to produce important scientific advances. The below figure shows the cumulative count of major innovations, based on a selection according to Bunch & Hellemans (2004). Indeed, according to these numbers we are led to believe that there was not so much a technological stagnation in the medieval Islamic world as a rapid expansion in Europe that explains the shifting relations of economic progress. Granted, this comes with major caveats, and I hope that future research will clarify this.

In historical business cycle studies a somewhat longer cycle called Juglar cycles of roughly 7-11 years of duration can be observed. It is now 10 years since the crash of 2008. Maybe yesterday’s events on the financial market will not develop into a recession or a full blown crisis, but if they do it is not all too unexpected. The figure below shows historically observed 8-16 year cycles for 1850-2010 for UK, US and Sweden’s GDP growth, applying a wavelet filter (Daubechies, MODWT). There is considerable correlation between UK and US, and in general for Sweden, excepting the WWII and immediate post-war period.